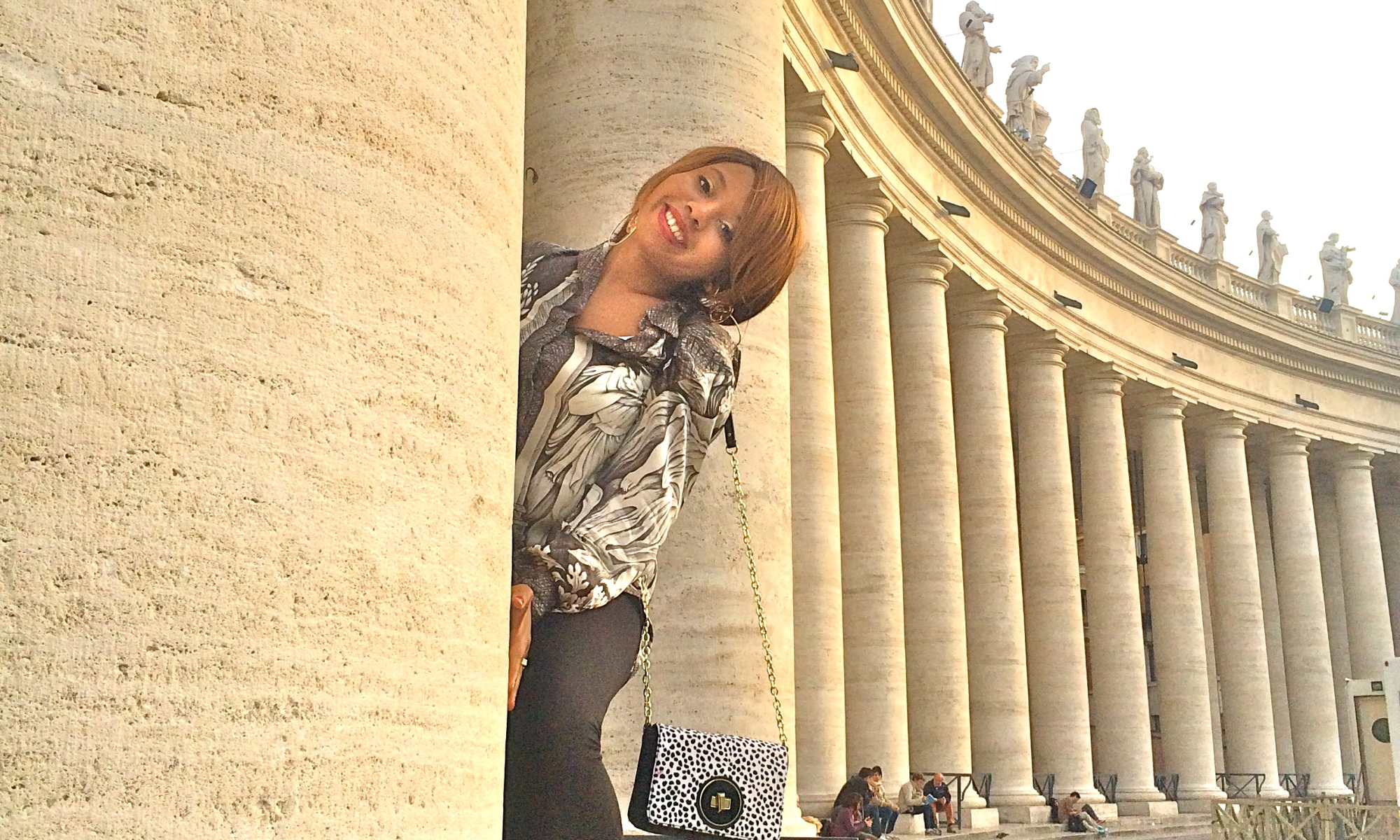 “You know literally, we can go shopping in Italy…”-Jadakiss

The first time we took a taxi while in Europe was in Rome. Our train to Rome was about 6hours and we had no idea how to navigate the metro system (nor did we want to). The driver was a bit mean and he tried to overcharge us for our ride.

Ky Tip: Beware of this scheme. Taxi drivers will assume you are a stupid American and will try to overcharge you for their services. Make sure they always have their meters on, unless it’s a standard charge from the airport and also go to each country knowing approximately how much the cost of a taxi is. I used the following website for these calculations: http://www.worldtaximeter.com

Kolbe Hotel was absolutely beautiful. It’s in the midst of the Roman Forum and the Colosseum. I literally was amazed when I opened the door to the room. It was a duplex- loft. This was the best hotel we checked in thus far.

We got dressed (but not fast enough) and headed to Vatican City. It was beautiful and vast. However, when we got to the Sistine Chapel it was closed for the day. So we did what anyone would do…take flicks! 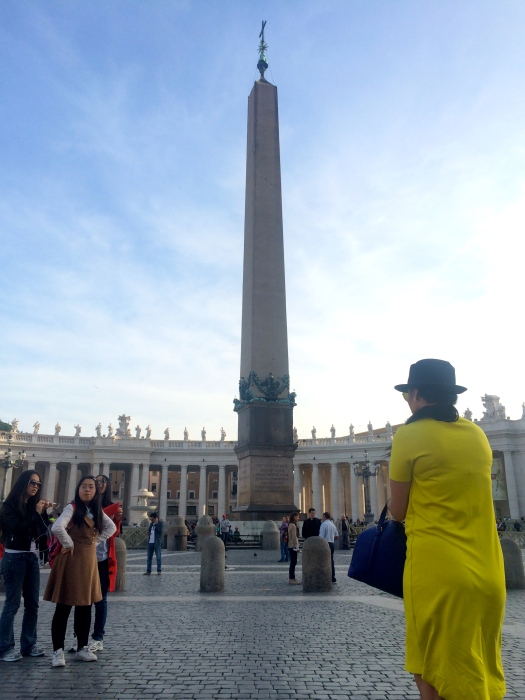 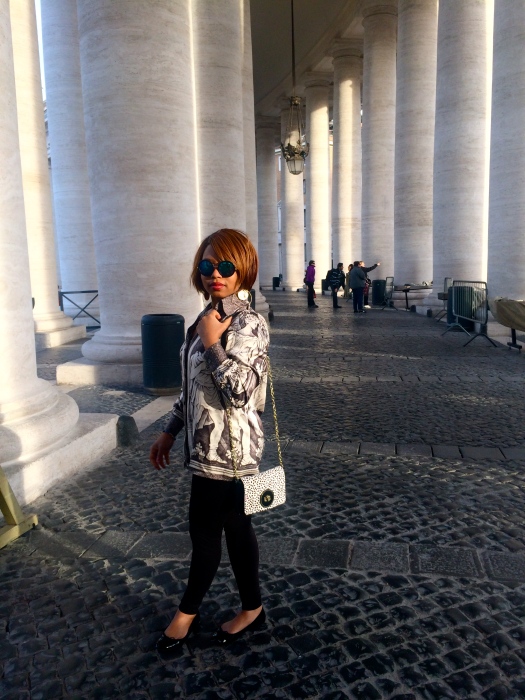 We headed back into Rome to make a wish at the Fountain de Trevi or Trevi fountain. Trevi had swarms of people surrounding it. I made a simple wish and like everyone who has ever thrown a coin inside and held high hopes for returning to Rome one day. 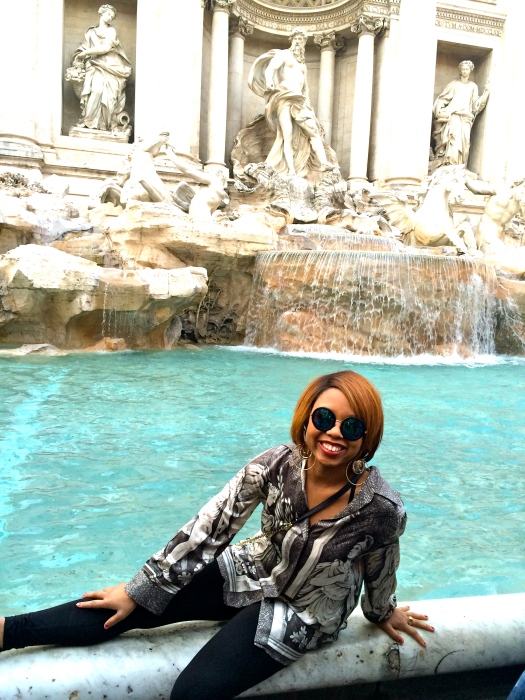 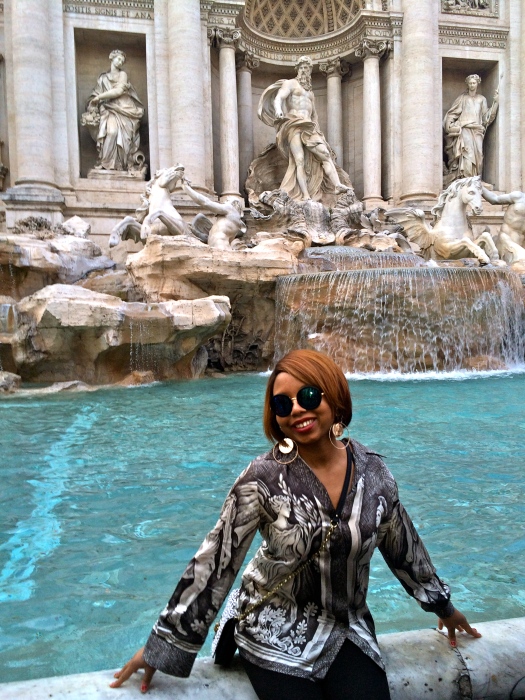 If I can count the number of times we ran in Rome, whether it was to cross the street or catch a bus it would be endless. We took buses everywhere. Rome was not as strict about paying for transportation, which worked to our advantage because we got on and off as we pleased. We wandered around aimlessly until we unintentionally discovered the Roman ruins or the Roman Forum. Honestly, this was one of the greatest moments of my trip. Stepping back into time and experiencing how the ancient Romans lived was the most magnificent experience ever.

Our walk back to the hotel was creepy, to say the least. We got chased by a bunch of Italian children who were looking at us weird and pointing at us. However, once we got to the hotel there was no way we could just stay in for the night. We were in ROMA!!!! So we went roaming around the city in search of adventure. It was around 11PM, but this place was still alive.

We went to a local bar that was very chic, followed by a bus ride for the heck of it. We got off the bus at the perfect stop and decided to switch gears and start searching for pastries. A local told us about a bakery where we could get fresh-baked treats straight out of the oven. YUM!!!

Time was of the essence for our last morning in Rome. We had a plane to catch at 2pm which meant we only had a few precious hours left in Italy. Our morning consisted of the Roman Forum and the Coliseum. 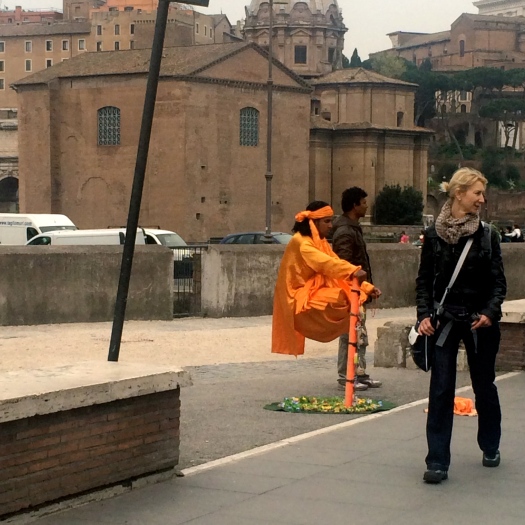 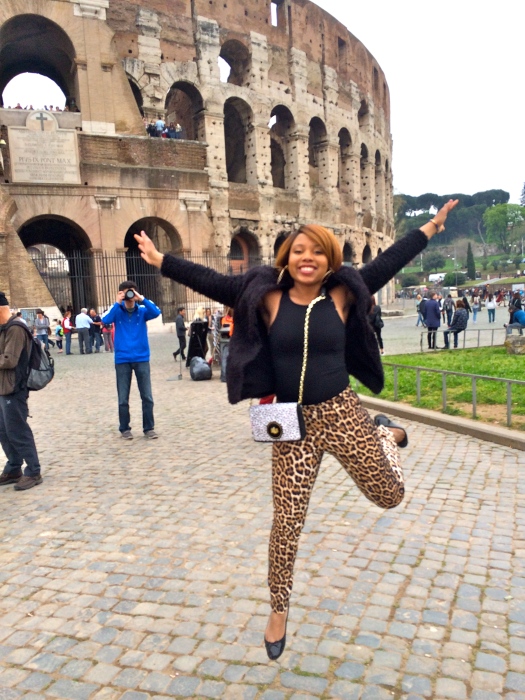 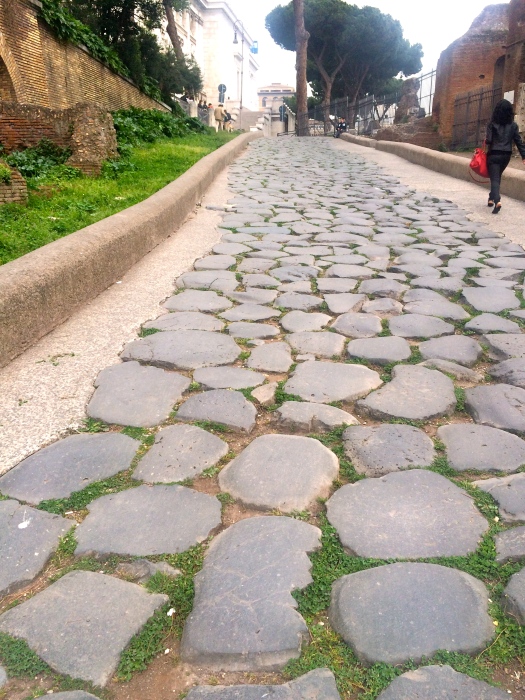 Shortly after it was time to say Arrivederci Italia. España here we come!

Ky’s Verdict: I like to think of Rome as a hybrid that merges the elements of city life with its historical past. I can’t wait to go back. This city has too much history and attractions to experience in one day. I just didn’t have enough time and I yearn to return. FYI- Italian men, love chocolate women. This is a gorgeous city and the preservation of its ruins was captivating.

In the villa, in Venice, sipping vino – Jay -Z

Imagine riding on a cold train for 14hrs, with nothing to eat or drink, just to pull up into the most majestic city you’ve ever seen, completely surrounded by a large body of water and colorful buildings. That was my experience upon reaching Venice and that extensive train ride was so worth it. When we got out of the Venezia Santa Lucia train station, I felt like I was in a fairy tale storybook. We walked over a bridge that crossed the Grand Canal and down a block to our hotel.

The first thing we did was EAT! We found a quaint restaurant close by and ate carbonara and a seafood platter filled with squid, octopus, and prawns. Venice food is so good. 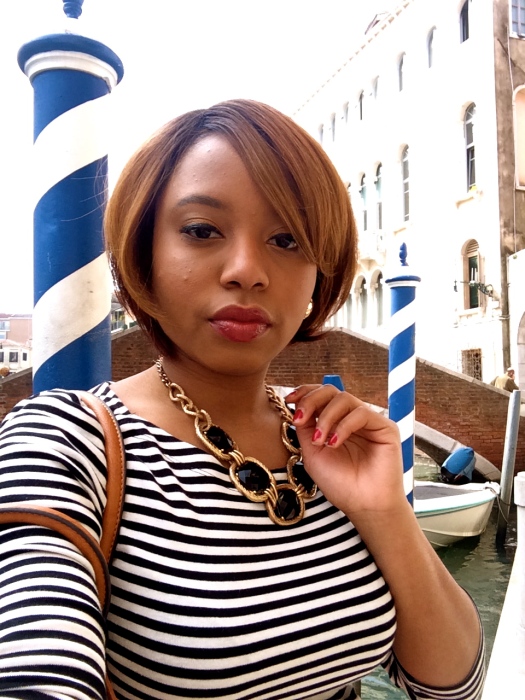 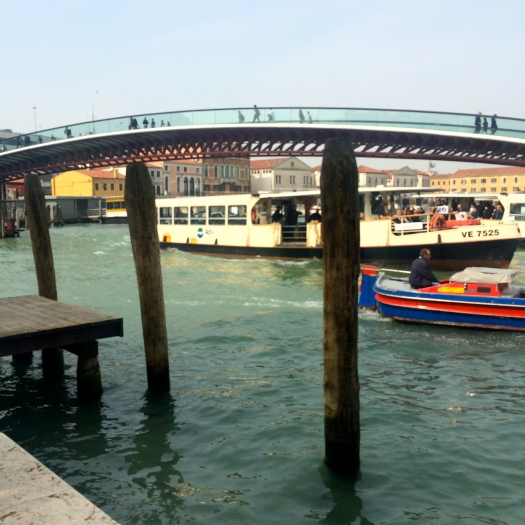 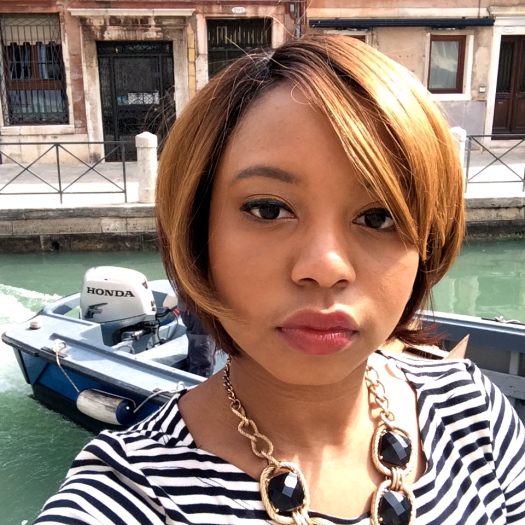 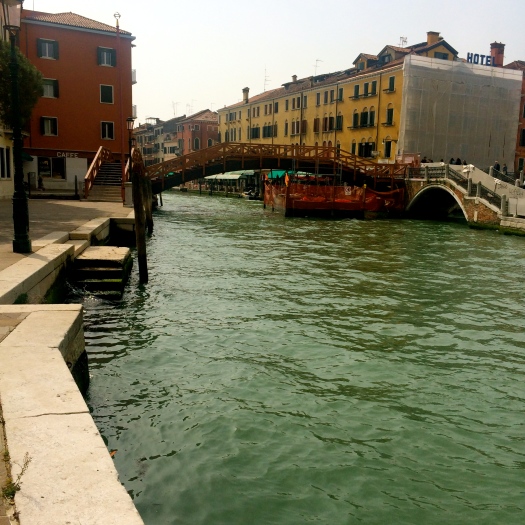 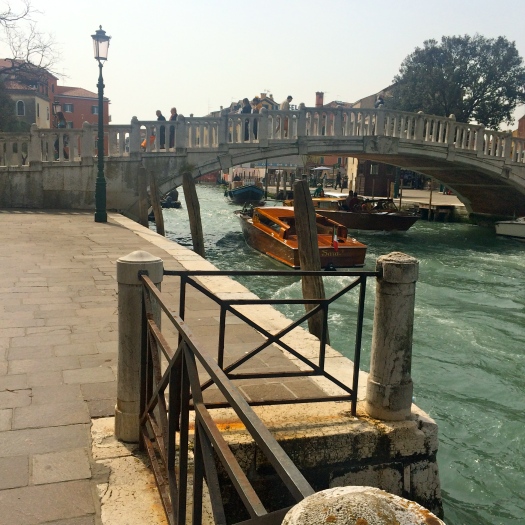 After lunch, we went walking through Venice taking in its eloquence. Venice is so effortlessly beautiful. 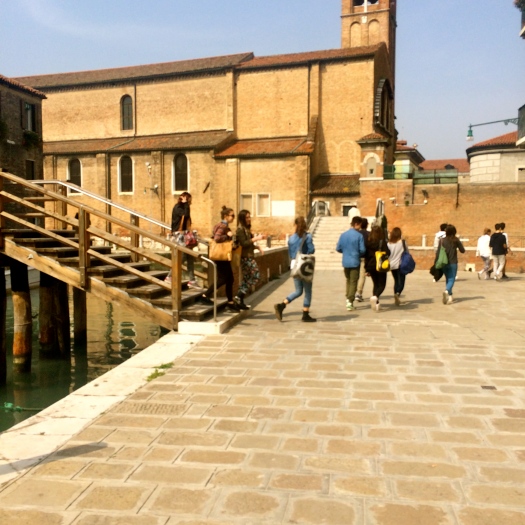 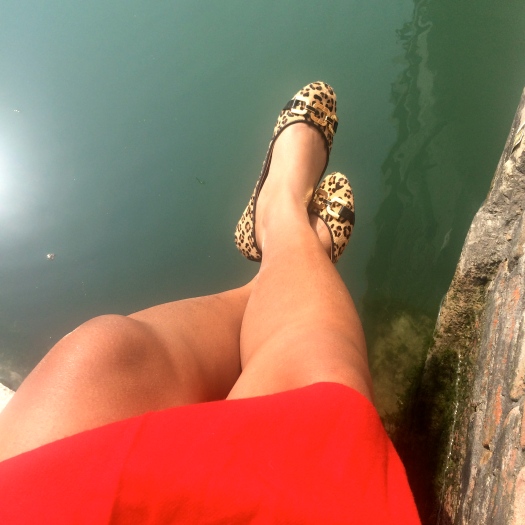 We wanted to buy wine and strawberries for our gondola ride just to set the mood. Luckily we didn’t have to search very far before discovering a supermarket where in addition to our wine we picked up Nutella. There was a Gondola man outside of the market who seemed cool and had a gorgeous boat so we did what anyone would do and tried to negotiate the 80 € price down before hopping on. 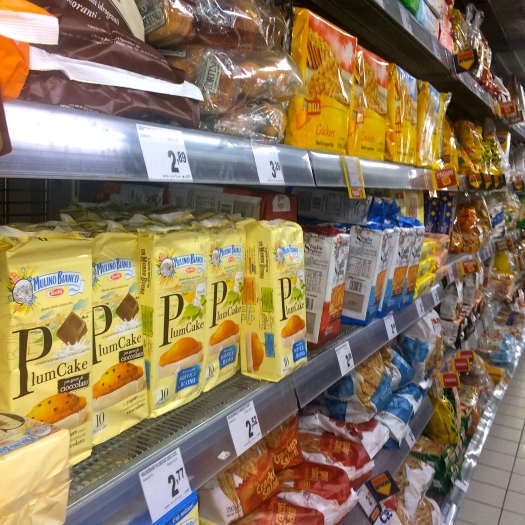 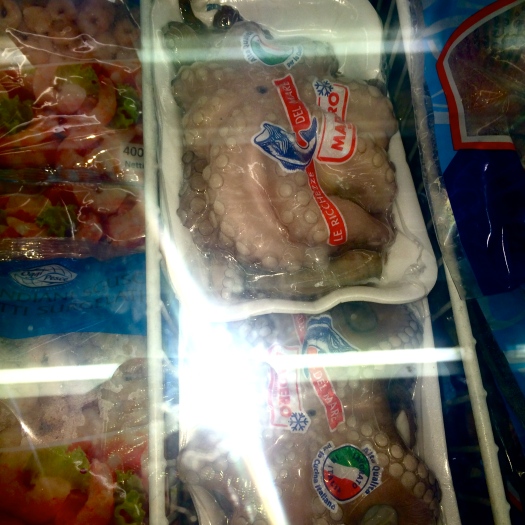 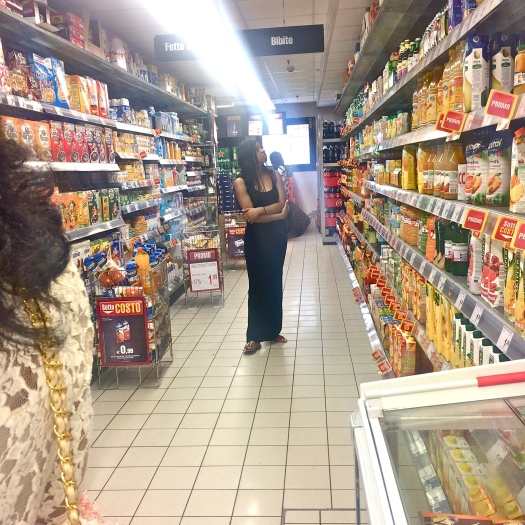 Our Gondola ride was pretty awesome. We sailed along the Grand Canal, snapping flicks and listening to the history of Venice. We passed by the Marco Polo house, only to discover that Hollywood was there shooting a Marco Polo film. It was awesome to see all the actors dressed like they were living in the year 1295. The ride leads us under various bridges and secret passageways that unlocked the mystical charm of Venice. Our tour guide was super cool, until someone got Nutella chocolate on his hat and he went INSANE! He kicked us off his boat cussing us out in Italian. You had to see it to believe it.

We had one more thing to do for the day and that was to find San Marco Square. Venice has signs on buildings with arrows that points you into various directions and you have to keep looking for these signs…it’s so bizarre and very easy to overlook. 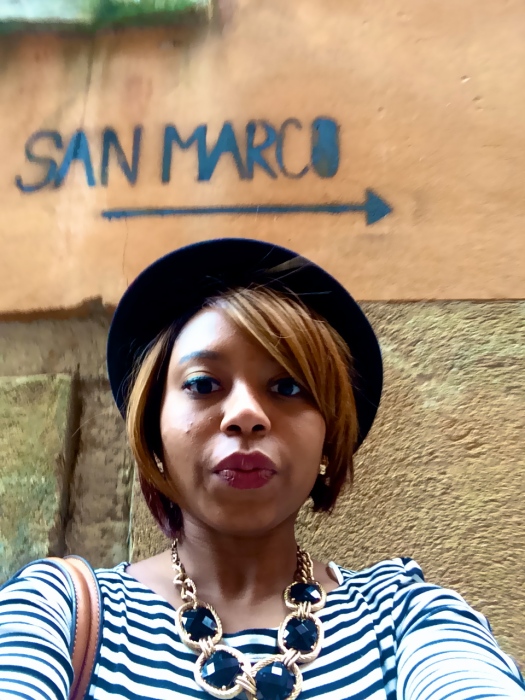 I think the city is a set up for getting lost. It’s something that will inevitably happen to you. We roamed the streets aimlessly sometimes following the crowds and other times just walking into desolate alley ways stopping at Gelato stands and bakeries along the way. Venice is weird like that, one minute you are surrounded by hundreds of people and other times you are on the streets completely alone. 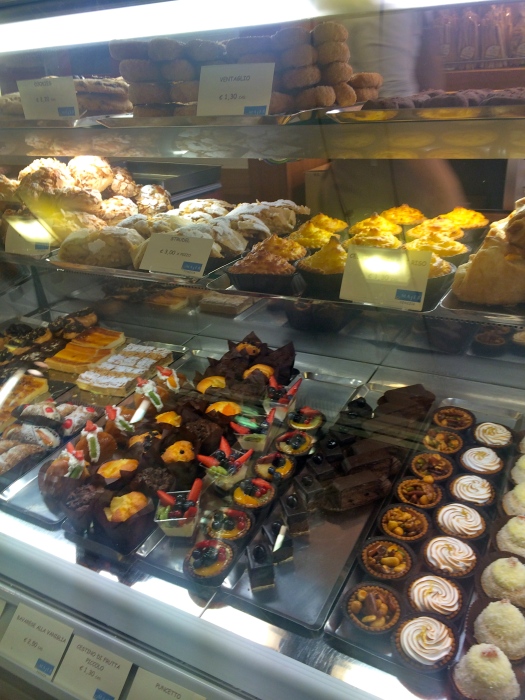 Finally, we discovered San Marco Square, the heart of Venice. The first thing we did was go inside St Marks Basilica. I walked to a pew and kneeled on the stand praying to God and thanking him for his blessings and traveling mercies. I then put holy water on my head and walked out. San Marco Square was filled with tourists, pigeons and amazing architecture. 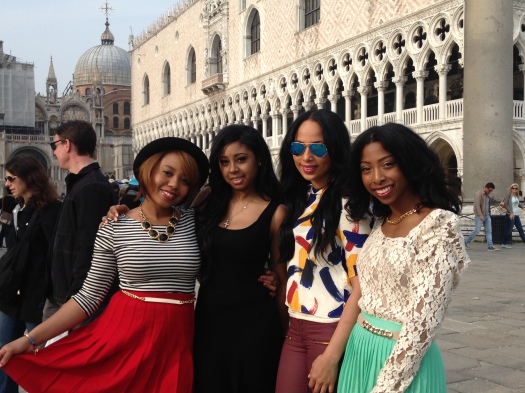 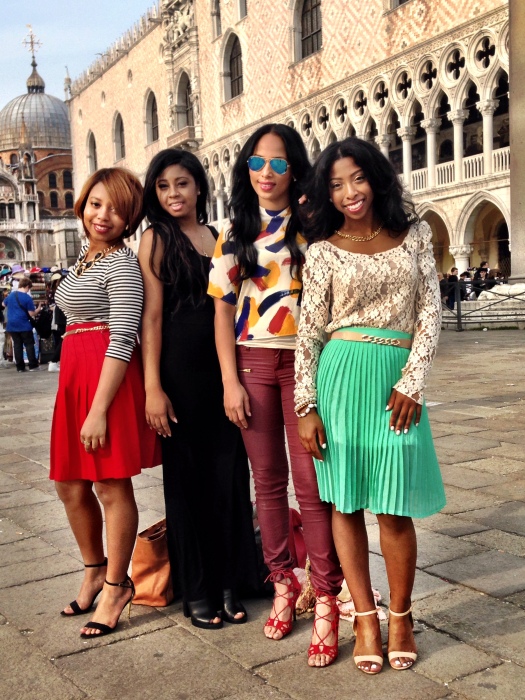 Trying to find our way back from San Marco Square to Santa Croce (the neighborhood of our hotel) ultimately meant we would get lost, yet again…only this time we were really lost. I guess I can cross off my bucket list. We walked across the Rialto Bridge, one of the oldest bridges in Venice. It was massive and the sun was setting over it which made it look extra magical. We then walked through a few alleyways, turning left and another left, walking straight down a path, crossing a bridge and walking along the Grand Canal until finally, we saw something we recognized…BURGER KING! In Venice, there was only one McDonalds and Burger King. It just so happens that our hotel was close by. We could finally breathe easily.

That night we had free cocktails at our hotel bar and talked candidly with the staff. It was after 10PM so we knew Venice had completely shut down but we found a restaurant close to our hotel who cooked us seafood spaghetti and carbonara. Magnifico!

Ky’s Verdict: I love Venice but I probably won’t be visiting here anytime soon. All I needed was that one day to experience this beautiful city but after that, I can see it becoming boring.