The night before Women In Travel Summit 2015 (WITS15) I planned out my whole schedule on Sched, which is a genius app for organizing your schedule and calendar. I was able to sync all the activities I would do for the weekend on my Gmail calendar, which alerted me every time I had a workshop coming up. I was all packed and ready to head to Boston for a weekend of connecting with other women travelers like myself. I hoped to leave with new friends and lasting connections yet I had very little expectations for what the weekend would bring. I love going into a new experience with an open mind and heart.

I realized I was in Boston when we drove past the harbor leading up to the Engineering School at Boston University. Beautiful townhomes lined the stoned streets, it was so charming. The first event on the Sched calendar was an opening party at the We Work South Station. I decided to have dinner with my mom and grandmother instead, whom I brought with me to tag along and enjoy the city while I was at the conference. It would be the only time I could to hang out with my favorite ladies before the conference really got started. 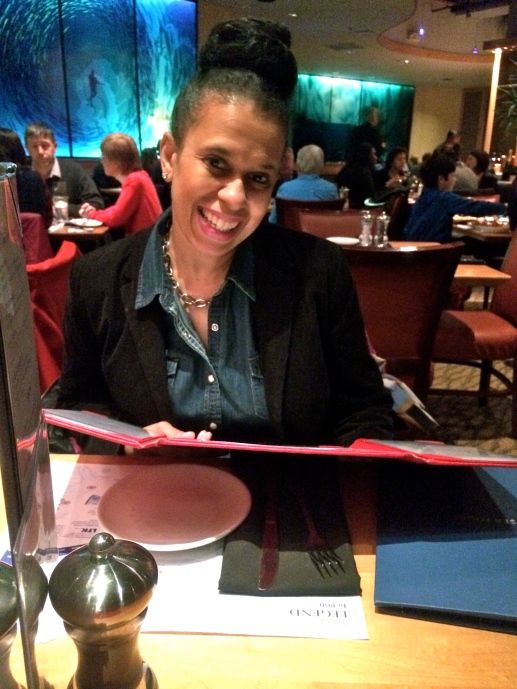 Saturday morning, I woke up refreshed. I got dressed in what seemed like a standard conference outfit; a dress, tights, boots and a cardigan. Everyone knows you can’t attend a conference without a cardigan. I checked in and was super excited when I was told that the amazing travel bags that were on each chair in the conference hall was for us to keep. I was torn between the red and the black. The red was vibrant, but the black was practical (I went with the bold red). I was overwhelmed and quite excited when I saw how many beautiful women were in attendance at the conference. 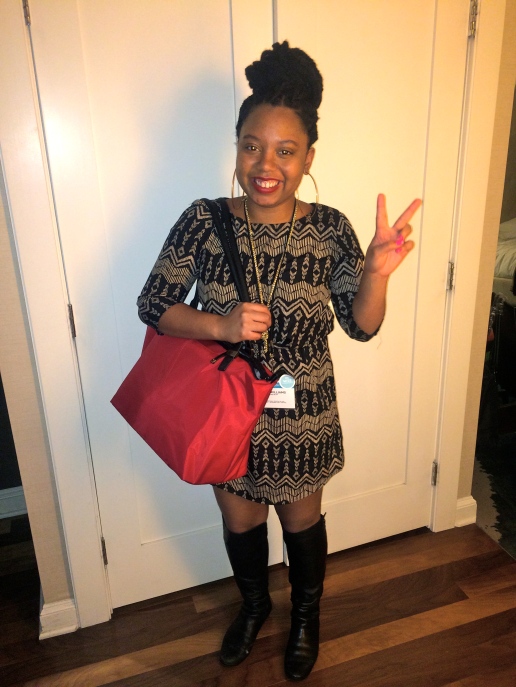 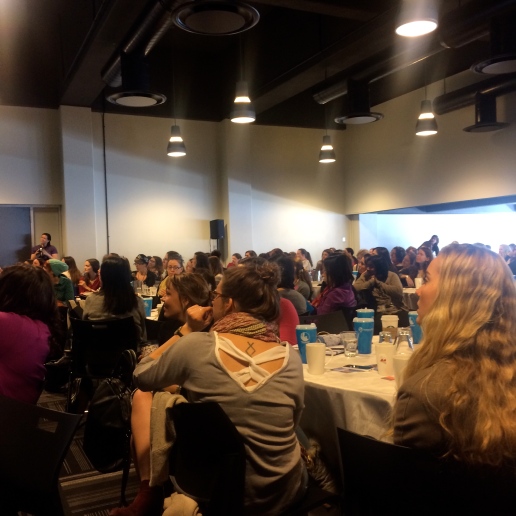 Where would I sit? I found a seat next to lovely women, as close to the front as I could possibly get. I love sitting in the front, it keeps you alert at all times. Breakfast was continental and consisted of bagels and delicious muffins. The opening speech came from an amazing woman, traveler, and entrepreneur, Asian Fusion Girl also known as Dina. Dina’s story was raw and relatable. Dina grew up internalizing the negative words of her mother who told her she wouldn’t amount to anything (her father was a bit more supportive and compassionate). She used these words to fuel her life to great heights. While in college she decided to pursue a career in music. She got on a plane to Brazil to connect with her uncle who had a connection at MTV in Sao Palo. What came out of her spontaneous trip was a record deal. However, she ended up winning a huge legal settlement, when she heard the music from her demo tape on a commercial that was broadcasted throughout Brazil.

She decided to travel with her newfound fortune. While in Italy, she met a man who she gradually fell in love with. He was filthy rich and treated her like a queen. They traveled the world on his private jet and didn’t find it necessary to carry luggage, as there would always be clothes waiting for them at each location. He eventually asked her to marry him, but not before she invested some of her money into the stock market and was making huge returns; Dina was deemed the Girl with the Golden Touch because it seemed as if everything she touched turned to gold. Her fiance asked if he could invest some of her money and she didn’t think twice about it. After all, he was wealthy and such a boss. She admired what he did and how he handled his business.

One day when everything in Dina’s life was perfect, she received a call from her lawyers, frantically saying all her assets had been frozen because her fiance got busted for his illegal doings. She lost 90% of her assets. After going through all forms of depression she decided to travel the world and give the 10% she had left away to people in need. This woman walked right into her purpose. She opened up kitchens to feed the lower caste people of India and helped save 3-12-year-old girls from being trafficked in Cambodia. She eventually picked herself back up, so overjoyed by her travels and began thriving in business again, initially with her blog Asian Fusion Girl.

I was so moved by Dina’s speech. Her honesty and transparency set the tone for the rest of the conference. It was at that very moment when I realized the type of conference I signed up for and I am so happy I did. There were people out there that travel with purpose and I would learn more about giving back while traveling as the conference went on. Yet, this felt like a space where women could be empowered. We could be uplifted. We could share our stories. I was absolutely excited about what the rest of the day would bring.