When I told people I was headed to Denver, most questioned: “Why?” I know it’s not the typical go-to destination, but Denver is a major city that’s on the come up. To be honest, I probably would’ve never visited if I didn’t have a conference that I was attending. A few of my Lyft Drivers mentioned that there has been an influx in the rates of tourists since marijuana became legal there.

Denver is like any other city. It’s mostly filled with suburban neighborhoods but has a downtown element that’s charming. As a solo traveler in Denver, I stayed at the Hyatt Regency Aurora Conference Center, which was located in the town of Aurora. The hotel is only 2-years old but my stay was superb. The color scheme was burnt orange and blue, with hints of wood. It has a pool and a full functioning gym. I chose this hotel because it was near the conference that I was attending.

Most of the people in Denver were actually quite friendly. I only had one horrible encounter on my third day there, when a crazy (racist) man came into my Lyft and got mad at me because I sat in the front seat. When I offered him the seat, he said he didn’t want it, and threatened to choke me…it was odd. That was the last time, I did a Lyft-Line for the rest of my time there; I almost forgot that I wasn’t in Kansas (aka New York) anymore.

The day before the conference started I decided to explore downtown Denver. I came across a few gems. The first being the Denver Museum of Art. There was a powerful exhibit at the museum, which explored the plight of Native Americans and their culture through the eyes of artists. 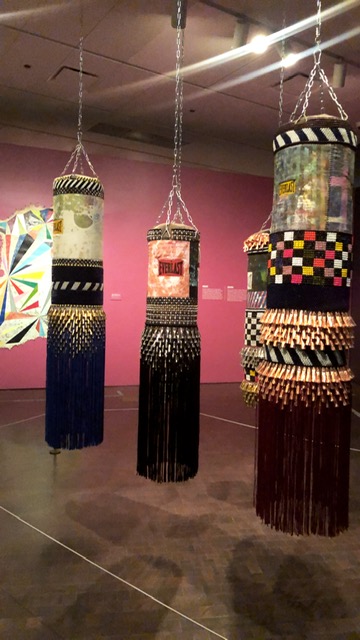 My art museum visit was followed by a stroll down 16th Street. 16th street is a strip of stores and food establishments, kind of like an outside mall. I went inside stores like Victoria Secret, Bare Minerals, TJ Maxx and H&M. After that, I ended up on 15th and Larimer, but it was blocked off due to a food festival they were having.

One of the primary reasons people visit Denver is because of the mountains, however, since I was alone it was not something I wanted to tackle solo. I will be back next year (God’s willing) and will definitely add an exploration of mountains to my list of things to do.